Where do I begin? It was Saturday March 1st 2008. I was not so unlike many men my age (having recently turned 55), working long hours, eating poorly and drinking too much. So when I woke up that morning with blurred vision and a weakness in my arms I wasn't too distressed. The alarm bells began when I got into the shower and had difficulty raising my arms to wash my hair. 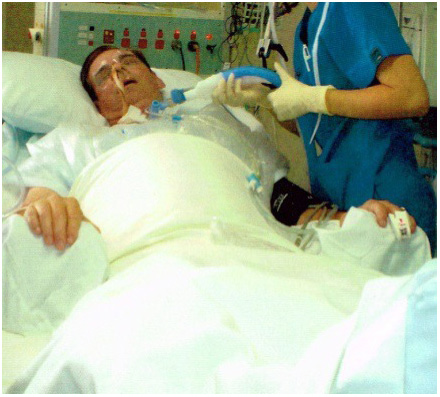 A trip to a local doctor (not my usual GP) and I was diagnosed with having suffered a TIA (a mini or warning of a stroke) and was told to go home and rest for the weekend and if no better on Monday to have a brain scan. Saturday afternoon I had trouble walking when I presented to Nepean ED, at the insistence of my wife and son, and by about 7 pm was diagnosed as having developed Guillain Barre Syndrome (GBS). I'd never heard of it.

So after having CT Scan and an MRI by midnight I was in ICU. In the early hours of the morning I had a spinal tap but the needle didn't go where it was supposed to, so it was tried again and again. The next night, apart from the big toe on my right foot, I was completely paralysed and intubated. Because I had movement in my big toe a speech therapist set up a communication device (pictured below left),

consisting of a toy bear drummer that also blew a whistle. This allowed me to gain a nurse's attention. Unfortunately, in the early days at least, once the nurse arrived I couldn't indicate my needs.

I spent 241 days in ICU, 14 days in a ward and a further 116 days in rehab as an inpatient, followed by more than 4 and a half years as a rehab outpatient.

In ICU I had many good days and nearly as many bad. The worst thing was not being able to move or communicate, I wasn't brain dead...just my body wouldn't (couldn't) react or do what I wanted it to. In fact my body didn't respond to my wishes, or others, at all. So frustrating.

During this time I was hallucinating and having really bad dreams as a result of the cocktail of drugs I was receiving at the time. Added to that I couldn't completely close my eyes, so they were taped shut (pictured right) to prevent damage keeping me in perpetual darkness. This combination was really scary. Fortunately this stopped after a time.

A major part of my treatment in the early days was the use of plasmapheresis. I remember very little of this time, except it seemed to last forever (in fact it was only 2 - 3 hours each time) and feeling very, very cold and uncomfortable.

Actually everything seemed to last forever and felt uncomfortable, whether it was creating splints for my hands or laying me on my side and I hurt whenever I was touched.

I was always an IT freak, partly due to my occupation. My laptop was brought into ICU, mainly so I could watch dvds my friend had made of all of my favourite footy teams and the goings on of the footy club of which I was President. Eventually, the ICU team decided I needed to get more interactive. So with the purchase of a piece of equipment called a "jouse" by the ICU team, a mouth controlled mouse, and a very good friend, who set me up with an internet connection and email account, I went live on the internet.

Talking to (or at least being talked to) and being visited by previous sufferers was so important to my recovery. That's a major reason why I am so happy to visit patients, and talk to them if requested. I am also happy to address medical students, as I have done in the past, to pass on my experience as a patient.

Eventually I was weaned off the ventilator, which created a lot of fun for me and the ICU staff. I'm not sure if it was my idea or one of the nurses'. The idea was if I had to do breathing exercises they had to do exercises too. 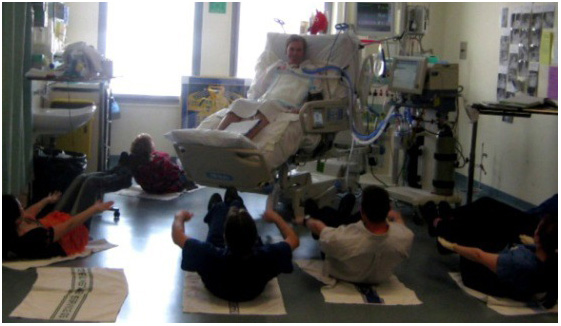 So each day there was a line up of Doctors, Nurses, Physios and ancillary staff doing things like star jumps, burpees and push ups. If I was able to reach the target 10 times they had to do that day's designated exercise 10 times as well.

I owe so much to the ICU Nurses, ICU Doctors, my family, friends and a couple of former GBS patients. One former patient will always live in my heart .She would come and visit almost every 2 weeks and, even though rehab was moved to another location (it was being rebuilt at the hospital) she still visited. I owe her much. I was always being encouraged and told how strong I was. I didn't feel strong.

My next move was to rehab. At first I felt deflated because I still relied on a hoist to get me out of bed, I couldn't walk or even stand up. I remember my first day in the rehab gym watching a little old lady walk up and down, up and down and here I was standing on a tilt table, watching and thinking "I've got nothing".

Once again I received great support from the Rehab team, Doctors, Physios and OTs. The importance of these people should never be underestimated. Just as the ICU team got me to a level, the rehab team lifted me beyond that. ICU kept me alive, Rehab gave me a life.

It was not just hard work but a social activity as well. As a matter of fact I believe the socialising was just as important as the physio and in some cases more so. I loved the rehab work but I could also interact with other patients and I felt "normal".

I have made friends with and visit people who suffer from MS, stroke, amputees and GBS. It has become a major part of my life.

I am so lucky. I'm alive, I have my faculty (some may question that), my family and many friends. I walked my daughter down the aisle at her wedding (that was a very big thing), saw my son get married to an ICU nurse (that too was a very big thing) and have been able to spend time with my recently arrived granddaughter. My wife has played a major role in my recovery and without her I couldn't have got this far. I have also had the opportunity to meet and talk to people about GBS, a subject I think awareness needs to be raised to the general public.