What is your role on the Committee and what does it entail?

My role as Patron is to serve as a public figurehead and to support, encourage, help promote, and endorse the work of the Association.

Can you share your experience with GBS or CIDP?

As an Olympic Swimming Coach, owner of several Learn-to-Swim schools and running a sports goods shop in Sydney’s Northern suburbs, coming down with Guillain-Barre Syndrome in 1974 was pretty disastrous. At the time I was probably doing too much with 5am swimming training every morning – working in our Swim Shop from 9am-3:30pm then back to the pool for afternoon training from 4-6pm followed by “household duties”, and its NOT as if my husband, Forbes, a wonderful and innovative swimming coach, was “good around the house”. Years after our Golden Wedding Anniversary he still does not know where the knives and forks live!! Swimming coaching includes all day competitions on both Saturdays and Sundays. 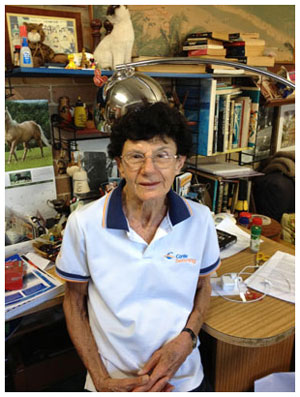 The Swim Shop was open at weekends too! There was ‘book work’ as well, accounts, wages etc. Yes, I was doing too much. One week before officially coming down with GBS I collapsed while we were at the theatre, I put this down to ‘flu’, which everyone got then before injections started. A week after this flu collapse we had a Conference in Canberra. This annual event always around ANZAC Day lasts for a week, as well as lectures there are ‘trade’ stalls showcasing caps, goggles, swimsuits, and we were running one of these. I had driven down with the gear and set up the stall. Next morning in a rare burst of self-indulgence we ordered breakfast in our motel room. When it arrived I couldn’t hold the tray! Then I couldn’t get my hand up to my mouth. We’d had ‘Chinese’ the night before, I thought I must have been allergic to the monosodium-glutinate in it! I struggled down to man the stall but I couldn’t hand goods to customers, by lunch time it was getting worse, Forbes got me to the car, the last time I walked for a very long time, and took me to, (the old), Canberra Hospital, into a wheelchair, my first experience of one -- but certainly not my last. We were lucky, being ANZAC Day the place was staffed by young, inexperienced student doctors who had just that week had lectures on a very rare disease GBS! Instead of being sent away with a Panadol and a pat on the head, they went to work with all the then known tests and soon established that it must be GBS, requiring drastic measures – immediate air ambulance to Royal North Shore Hospital in Sydney. I had to leave Forbes to take over my responsibilities with the Swim Shop and lectures. Knowing absolutely nothing about GBS I was terrified during the flight, which went via an outback station to pick up a pregnant mother-to-be, that I’d fall asleep and die before I could be put on a respirator! Well, I didn’t die and I was put on a respirator at North Shore. Some 20 years later I bumped into the Orderly who’d admitted me. He said “You’re alive, I thought you’d die in a few hours!” So you see my deterioration was very rapid and very severe, years later research suggests that the quicker you go downhill with this disease, and the more severe it is, the better your final recovery. My experience would back this up. You have read everyone’s stories of how it is, how painful and how long it takes to recover – I completely concur with them all. I think lots of people tried (some succeeded) to come and see me in ICU, but one is drifting in and out of consciousness, you can’t talk or move or push the call button and I had weird fantasies, a whole gamut of colours, smells, tastes, sounds, amazing dreams. I was probably on morphine or other hallucinogens, anything to keep you alive. There was a new procedure being tested in America called “plasmapheresis”. I was the first to have it in Australia. They take some blood out and ‘wash’ it, then return it. Of course I was in no position to say “yes’ or “no” but I did survive, I’m glad and grateful they did it.

My memory of the worst thing in hospital, hearing the X-ray machine being wheeled up to my bed every day followed by the excruciating pain in my back as they sat me up to be X-rayed, pneumonia would be a catastrophic complication! The best memory is of Forbes giving me a beautiful, full length, pink, satin padded dressing gown, long before I could possibly use it. To me it showed he knew I would eventually recover. I still have it today! A significant happening along the way, I got Golden Staph in my tracheotomy wound, so they threw me out of RNS into isolation at Ryde Rehabilitation Hospital. I understand they closed the whole ward I had been in at RNS to try and get rid of it. The Golden Staph, which didn’t go until I got home, meant I could have no contact with other patients. I could not use the gym or pool, no meals in the dining room, being isolated in my single room I was often forgotten, no meals, no doctor’s visits, the bed would not be made. When I started at Ryde I could not roll over or press the buzzer, I had nightmares about the building being on fire and not being able to shout or move. Finally I progressed from a wheelchair to a ‘walker’, then to sticks and in the end, actually walking – albeit not too well. I still did not associate with other people, they would set me up outside in the garden and leave me to do my series of exercises alone, I was not even allowed to look at the hydro pool. Ages on I went home, nearly a calamity, one of our cats jumped at me in delight as soon as I came in pushing me over! 39 years on I still do exercises every day. I’ve had one knee replaced; it had been left very crooked. With our learn-to-swim warm pool at home I do my own hydrotherapy every day, I go to the gym as well.

My time in hospital taught me that there are always people worse off than oneself. We had head and spinal injury patients with us there at Coorabel – those people and their nurses and carers are magnificent and cannot be praised enough. I learnt to be more sympathetic and patient.

I am immeasurably grateful to my nurses and physiotherapy staff, to my husband Forbes, our friends and you GBS people who have all helped me recover as well as I have. Hang in there, there is light at the end of the tunnel, be as strong as you can physically and mentally.